A typical capital campaign runs about 16 weeks, though the time can vary depending on the size of the church, the amount of the goal and other factors. Before the campaign begins, hopefully a capital campaign feasibility study has helped determine the possible goals and measured congregational excitement for the campaign. So, after the church has analyzed the study report and decided to proceed, figure on 3-5 months for the campaign itself. It will be a great day when Commitment Sunday (sometimes called by a different name) arrives and the campaign is over.

Except it’s not over.

For one thing, a lot of people don’t return their pledge cards on Commitment Sunday. Despite all the focus on that day, people just forget! At Church Development, we figure that around 50-60% of pledges will come in on Commitment Sunday, 30-40% will come in the next few Sundays and the remaining amount will dribble in over time. So obviously it’s important to keep reminding people, as well as making extra pledge cards available in the pews, for at least 6 weeks.

But that’s not what we mean by campaign follow up. Follow-up is really a three-year process of:

This time is called the fulfillment period.


The level of commitment fulfillment determines the bottom line of the campaign, so it’s critical to keep the projects that will be funded by the campaign in front of members so they can track progress and remain engaged with the process. You may hit your campaign pledge goal, but if you only have 80% pledge fulfillment, you miss the mark. The campaign’s success depends to a great degree on the effectiveness of the follow up plan… and the follow up plan depends on your church capital campaign communication.

Communication is vital. One organization we work with asked non-fulfilling donors why they stopped their support: 53% cited poor communication from the church.

What kinds of communication are important?

First and foremost, say "Thank You". At Church Development we think saying Thank You is so important that we form a Thanks Team as part of every campaign. Its job is to send hand-written letters to every donor, thanking them for making a pledge (the team members know only that a pledge was made, not the amount, in order to protect privacy). In addition, as part of the pastor's role in a capital campaign we encourage a additional personalized note to donors, if the size of the church makes that feasible. In addition, some churches decide to give an inexpensive gift of some kind to each donor.

You’ll also want to thank all the church capital campaign volunteers who worked on the campaign. Typically the campaign has gone smoothly and parishioners enjoyed working with each other. Honor their hard work by an event, a note, a recognition by name in the bulletin, etc.

During the next three years, it’s critically important to say Thank You over and over. Many churches send out quarterly statements, keeping donors up-to-date on the amount they’ve contributed; the statements are usually accompanied by a note thanking people for their gifts. Annual statement are important too. Here are a few church annual reports to use as a template.

One way to communication appreciation is to keep people in the loop about what’s happening. You know the nursery rhyme:

Little Miss Muffet sat on a tuffet, eating her curds and whey.

Along came a spider and sat down beside her…

Well, what happened next? The story isn’t very exciting without an ending. Same is true with your campaign.

Many members of your church took the capital campaign just as seriously as you hoped they would… they embraced a stewardship mindset, prayed, and discerned how they would participate and then they stepped up. So share the results with them.

Tell your donors how successful the campaign has been and how the project is going. Mention the campaign frequently, how the gifts are coming in and how the campaign goals are being realized. A public visual of the campaign, like this one from St. Thomas the Apostle, can help demonstrate success. Don’t assume people can see what’s going on. Tell them, in print, on your website, in person. Offer tours, if appropriate. Involve people in significant milestones. Continue to use the campaign prayer at services (view examples of stewardship prayers on the ICSC blog).

Another smart way to communicate with people is to ask them for feedback about the campaign. Ask what they liked and didn’t like about the campaign. Survey Monkey is a free, easy-to-use tool to solicit feedback. This will allow people a chance to tell you how well the campaign went, as well as point out those areas that didn’t go so well. This gives people one more avenue to buy into fulfilling the campaign, as well as providing valuable information for the next campaign.

All these activities won’t happen on their own, of course, and they shouldn’t fall back on the church staff. Select a follow up committee to set up a church capital campaign calendar and then oversee the follow-up functions during the commitment fulfillment (payment) period, usually the three years following Commitment Sunday. This committee monitors commitment payments and sends out periodic statements and reminders, and coordinates the communication efforts mentioned above. Donors who work faithfully to fulfill their commitments appreciate being kept apprised of the campaign progress, and donors who are not as proactive need to be nudged from time to time to keep them on track with their commitments.

Finally, remember that people will be joining the church during the three-year fulfillment period. Make sure new members are given the opportunity to participate in the campaign. Work with your hospitality team to share the vision of the church, provide the campaign brochure, and ask them to complete a pledge card.

The desired outcome of follow-up is to ensure that commitments are fulfilled and that the congregation is prepared for campaigns that may come in the future. Church Development provides ongoing monitoring for its client churches throughout the commitment period to ensure that these outcomes are met. One of our church capital campaign references, Julian Wade, Ways & Means Chair at Eastminster Presbyterian Church in Stone Mountain, GA celebrated at the end of the 3-year follow up, "We have received 97% of what was pledged in our capital campaign. The plans we had were for repairs and major maintenance - not exactly the kind of plans that result in large donations. I am ecstatic about this percentage." 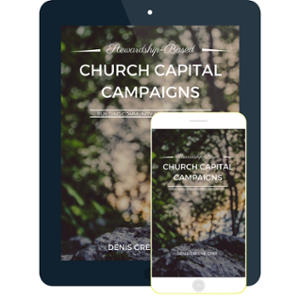